Home Ask Dr Cox How To Get Rid Of ‘Blue Balls’ 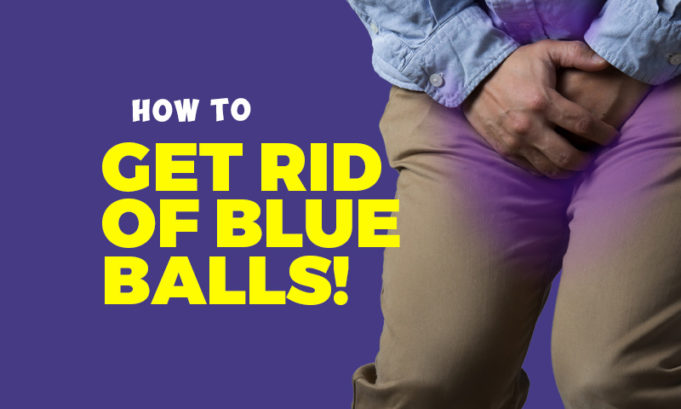 Blue Balls is the punchline to a million movie trailer thread comments eg: ‘That Avengers trailer gave me blue balls’. But if you’re lucky enough to be aroused for a prolonged period of time, then unlucky enough not to get a ‘release’, blue balls is also a very real and often very painful thing.

A couple of years ago I drove intercity with a gal pal who insisted on giving me a casual hand job for the full ride – without the decency of a finishing move. I suggested she was giving me blue balls, which most women think is just an excuse men use to trick them into coaxing a load out. So, instead of a blowjob I got a hearty laugh and the promise to finish up next time. But as far as my balls knew, there was no next time! By the time I dropped her off I’d had a full mast boner for nearly two hours. As I pulled away from her house I noticed a dull ache beginning to brew in my testicular region. Twenty minutes later I was in such ball aching agony I could barely walk.

So, What is blue balls?

Blue Balls is a sometimes extremely painful condition that occurs when a man has been sexually stimulated for too long without being allowed to ejaculate. This mainly occurs due to extended foreplay, unfinished BJs, half-finished handjobs and Guantanamo Bay level torture by girls who like to get you close without closing the deal!

Why is it called blue balls?

Blood pressure in the penis and scrotum can be almost twice as high as other parts of the body when you’ve got a raging hardon. When the excess blood doesn’t get the signal that you’ve blown a load and to back off, it can cause a slightly bluish or ‘bruised’ color in the testicles. Hence the name. The phrase was coined by someone with an aching sack in the USA in 1916.

Men have described blue balls as feeling like anything from a minor ache, to having your balls crushed in a slow moving vice. Some guys equate it to the feeling of needing to sneeze but not being able to. Which makes sense when your balls kind of do need to sneeze up some goo.

In general the pain is a dull, heavy aching feeling. It can be so intense in severe cases that it affects the ability to walk. The scrotum can become so sensitive that as much as the slightest brush against the area can feel like you’ve been hit with a hammer in the cubes. 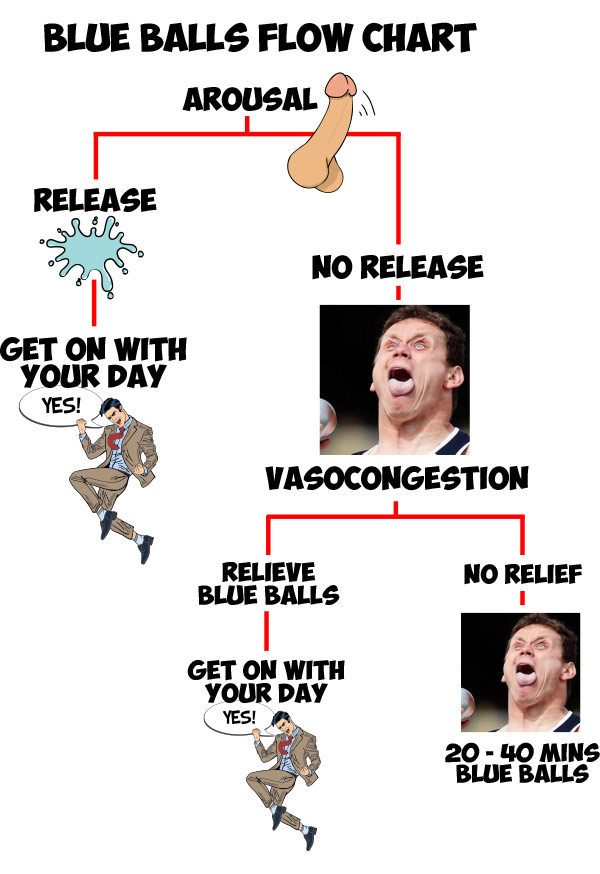 How long does blue balls last?

Blue balls can last anywhere from minutes – usually 10-30, or in some extreme cases several hours. If you continue to have pain in your testicles for more than 24 hours or after ejaculation you should probably see a doctor.

No your blue balls isn’t dangerous, even though it can feel pretty terrible. It should resolve within and hour or so and you can rest assured your man berries haven’t sustained any permanent damage.  If the pain / discomfort continues for many hours or days after you’ve stopped being sexually aroused then seek the advice of a medical professional.

In short, when a man becomes aroused, blood flows to the penis and scrotum, causing everything to become engorged. The pressure in the area will remain until ejaculation. When you orgasm, the body releases a hormone called nonadrenaline which helps contract the penile muscle fibers and arteries. This allows the blood to flow back out of the penis and return it to a flaccid state. If you don’t blow your wad, you can be left stuck with too much blood in the penis and testicles (vasocongestion). If there is too much oxygenated blood in your penis your balls and taint can become slightly blue in appearance and very painful.

Not all men get blue balls, but if you do, you’ll know about it.

How to get rid of blue balls.

According to Pediatrics – a peer-reviewed medical journal published by the American Academy of Pediatrics – the best treatment is “sexual release”. There’s a couple of reasons a quick wank might not be the most convenient solution though:

If you’ve already got an extreme case of blue balls, you may be in too much pain to want to pull your pud.

And If you’re anywhere other than alone, you can’t whip your dick out and declare it wanking season.

So, here are the generally accepted best methods to relieve blue balls.

Next time you feel the familiar dull ache starting to build in your balls, take action right away to avoid a potential lengthy discomfort. Even if it means having to excuse yourself from the family dinner to clear the pipes.

Oh .. Do women get blue balls?

Who cares right? It’s the one thing we can bitch about that exclusively ours! Actually .. it’s not. Yep! Some women do indeed suffer vasocongestion too. Just to spite us I’ll bet! Obviously not in their balls – but the clitoris and vulva become engorged much the same way the penis does. After all the clitoris is basically a small highly sensitive penis. Which makes you totally gay! Go here for more on female vasocongestion.