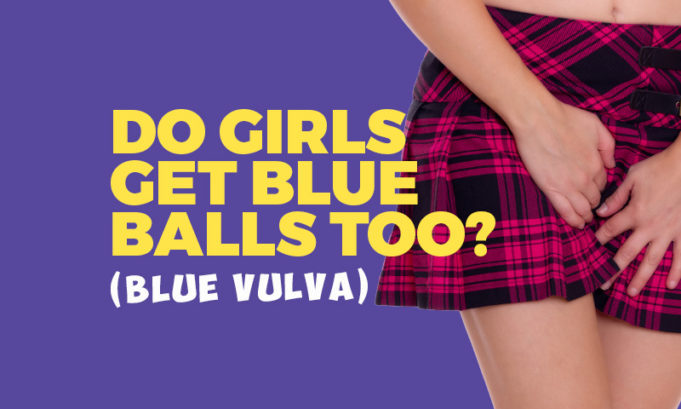 Most men have experienced the painful nut scourge known as ‘blue balls‘ at least once. The dull aching sensation mainly felt in the testicles and taint following extended sexual arousal without reaching climax. Like that time your girlfriend dry humped you for an hour and gave you half a hand job before her parents interrupted, then sent you packing with balls so swollen you had to walk home like a crab.

It’s like extreme disappointment for your balls. Or pretty much how girls feel after sex the majority of the time.

Blue balls is a pain in the.. well.. balls. But if we men thought we had exclusive rights to moan about it, think again. Women get blue balls too. Or more accurately, ‘Blue Vulva’ – which sounds way grosser.

Blue balls in men is caused by a pre climax increase in blood pressure and blood flow to the genital area. When this pressure isn’t released through orgasm the pressure can cause discomfort until it’s either released or goes away naturally over time. Usually around 10-15 minutes. The same principal applies to women. After all, we all have genitals. With women however, rather than the pressure building up in the testicles (HINT: if your woman has testicles she probably isn’t a woman), the pressure builds up in the uterus, ovaries and vulva, which to be fair to women sounds much worse than just your man berries.

For both men and women, if the pressure continues to rise without release for extended periods, the area starts to lose oxygen – which can turn your bits a somewhat blue color. Hence the terms ‘blue balls’ or ‘blue vulva’. And you thought it was blue cos your nuts were sad.

The good news for both sexes is that the condition isn’t permanent or dangerous. Once the pressure in the area subsides the pain goes and you’re not left with any physical damage despite the sometimes extreme discomfort.

Armed with the knowledge that guys aren’t the only ones who suffer extreme discomfort through lack of ejaculation; next time you’re pissed off with your girlfriend get her wetter than the Ganges then get up and leave, safe in the knowledge she’ll spend the next 10 minutes with an almost unbearably achy vagina. Unless she masturbates to relieve the pressure. In that case stick around. Then everybody wins!

To learn more about ‘Blue Vulva’, and why just because you come first doesn’t mean sex should be over, check out the video below from ‘Stuff Mom Never Told You’.