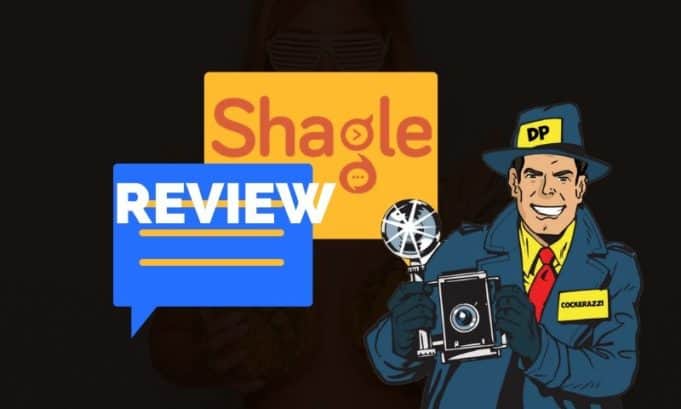 Here at TugHQ, I often tell you all about websites and services that have been around for decades, but today I wanna talk to my loyal TugBros about something a little different. Today, we’re talking about a service developed in the modern era, made, and intended for the needs of today’s internet users (and tuggers). As such, this service is unlike anything that came before it, it’s not exactly a cam site, and it’s not exactly a chat site. It’s both – and a little extra!

I’m talking, of course, about Shagle. Today, Shagle is among the few services that give users the fastest online sexting dynamic possible. And, it’s completely anonymous because it was designed to not require any personal information from you, other than your face which you can hide with one of the virtual masks provided by the site. Moreover, the site admins have made sure that every single experience on Shagle is entirely unique when they made it impossible for anyone to connect to the same person twice!

With that level of admin care, alongside its 16+ million members from over 70 countries, Shagle was destined for greatness from the start. Today, I want to take an in-depth look at Shagle’s journey and how they got popular enough for Tugger Cox (myself) to write them up!

Have you ever spent hours, upon hours on webcam chat sites like Omegle, or ChatRoulette looking for a girl to chat/fap with – only to be met by 100’s of guys flashing their dick and balls in your face?

For a while, we just had to accept it. That was until a beacon of hope shined itself upon the internet.

That beacon of hope is exactly what I’m here to talk about – Shagle!!

Shagle was launched in 2017 by Cogroup Limited and while it wasn’t an instant hit, so to speak, it instead started growing slowly over the past few years. They took extra time & care in order to build their user base, then kicked it into high gear to become one of the fastest-growing chat sites on the internet, jumping from just under 50,000 users in 2017 to a whopping 1.7 million in 2020! It’s predominantly popular in the United States, but since word gets around when good things are free, Shagle continues to spread their influence to tuggers all over the world.

Oh yeah, did I mention that Shagle is completely free?!

Nobody will ever ask you for any money while you’re on the site – unless you run into any golddiggers, that is. That’s just another one of the reasons to appreciate this site – most would charge premiums for such a unique service or find ways to charge you as much as possible, using upsells and pre-checked boxes. Not on Shagle. Here, all the required options are available, and you need only get the Premium membership if you wanna devote way more time to the site. More on that later.

For those of you that have never been on a free video chat site, it works pretty much like rolling a dice – every time you hit next, a new stranger appears. You can even choose not to sign up, but then the performance you’re offered by the site is even more limited, as you don’t have access to the gender filter, and guys will just keep popping up, which used to be a huge problem for tuggers on Chatroulette back in the day.

Shagle has managed to solve that problem and made this type of fast-paced cam surfing interesting again!

Anyway, when you go ahead and make an account, they don’t ask you for any personal information or for any sort of payment details. They just want you on the site, no ulterior motives here. When you sign up, you go through the brief process of entering your email, and after that, you get to use all of their special features – including the gender filter which lets you pick if you wanna cam with males, females or couples.

Furthermore, you get access to their translation services available from six languages – English, German, French, Spanish, Italian and Portuguese. Shagle did all this to help users become closer, by allowing them to communicate effectively regardless of their native language, and it’s worked wonders. It’s especially useful when you wanna communicate with a lovely foreign gal that you’d love to splash man juice all over. You know, just the usual stuff.

There is also a location filter that lets you access cams only from a specific country. If you don’t care, you can select “All countries”. Either way, Shagle’s got you covered.

When you start camming for the first time, you’ll notice that the site is pretty straightforward. Do you like someone? Keep watching. If they like you, they’ll keep watching too. If you wanna move on to the next cam partner, just hit the arrow buttons on either side. If you have something to say before your chat partner opens their mouth, Shagle created a feature where you can put your message in an intro text sent immediately after connecting! This should hopefully give you a better shot at not getting skipped right away.

Shagle protects your anonymity against everyone that doesn’t know you, but in case you come across people that are familiar with your face, (or your throbbing member, in case that’s what you plan on opening with) you may want to use one of Shagle’s virtual masks to conceal your identity. Also, Shagle has a Face Filter that blurs your face when it can’t detect your partner’s, making it easier to avoid dodgers.

The site asks for cam and microphone access when you first start connecting with people, but if you don’t want to give those out, Shagle has an answer for that too. Aside from the video chats, you can choose to just chat through text instead of turning on your cam or your mic. Granted, you can text people you’re already camming with, but you should know that if you lose contact once, you’ll likely never be able to find them again. Unless you’re a creepy stalker, in which case, stop that nonsense, and be the sort of TugBro that I’d be proud of!

So, what do you do if you really like someone and want to let them know it in a way that doesn’t include your throbbing tugger popping up on their screen? You send them a gift, of course! These are small, virtual gifts that you can send when you get a Premium membership! Speaking of which…

Shagle will always be 100% free for everyone that wants to use it, but you can’t blame them for wanting to put an additional tier for all those that want to get the very best experience on the site. Just to get it out of the way – you pay by credit card only. No cryptocurrency, PayPal, or paper cheques, just a credit or visa debit card.

Whichever you choose, it’ll recur after the period is over so make sure to cancel if you want to stop using the site, though I can’t imagine why you’d want to cancel after getting a taste of all the essential upgrades it provides.

So, the only burning question left to ask is: Is Shagle a viable tug-destination?

Granted, it will probably take some practice. The golden here is that you really, really can’t start with just your tugger triumphantly staring into the camera. Talk to the person a bit, get to know them, conduct some research into whether or not they got a pair of big mouth-watering jugs to fantasize about.

Then you can pull out your legendary purple hammer and tell em’ all about where you’d like to splatter them with it. Remember guys, consent is important (of course), but let’s be realistic, this is a cam roulette site. Knock your socks off – within reason, of course.