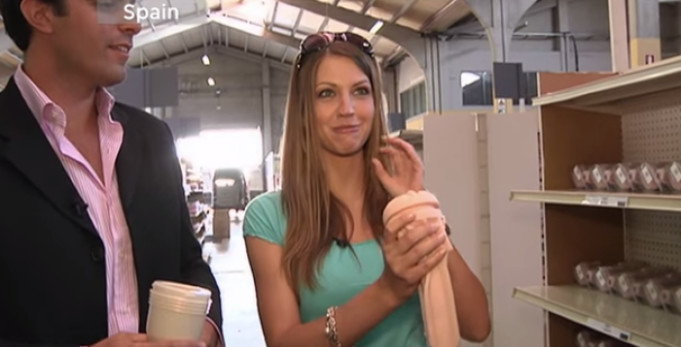 Eufrat Mai is from the Czech Republic, land of exceptionally hot women with evil bond villain accents. Her vagina was used to model the Fleshlight, which means she has the world’s most popular and used vagina. Of course, the real thing has only been used by a select few. But if you’ve ever used a Fleshlight – it’s about as close as you’ll get without actually getting the real thing. Plus when you’re done you can stick it back in your sock drawer out of the way. Try that with your real girlfriend.

Eufrat Mai recently took a tour around the factory that builds the Fleshlight. Or in her case, the factory that makes the replicas of her ‘vaheena’ for millions of men all over the world. This video has some really weird bits, and we don’t mean the vaginas. Her dad’s advice that her vagina has magical powers and standing next to a guy while he lubes up and fingers a model of her pussy being just a couple.

Bonus question: how often do the guys who work in this factory take ‘bathroom breaks’? Is there a more distracting place a guy could work?