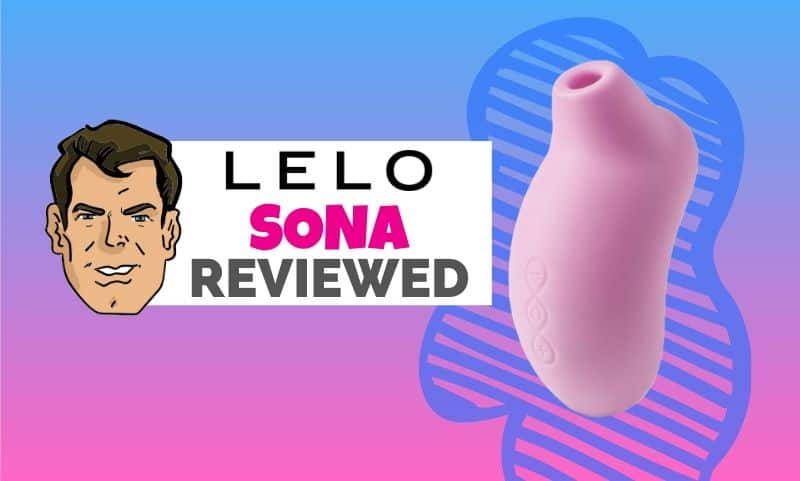 If so, you should consider looking at “sonic wave” sex toys. This style of sex toy is amazing for achieving intense orgasms with minimal effort. Lelo Sona is the luxurious sonic clitoral massager that could be the answer to all these wishes and needs, in this review, we’ll get right down to what makes Sona so special and why you should consider picking one up for your lady friend!

What Is The Lelo Sona?

Before trying sonic wave sex toys, my girl swore she was not a squirter – we were both shocked when she gushed while using the Sona on her clit while we were having sex! Vibrations and fingers have been forgotten since I got her this sex toy, and I couldn’t be happier knowing that it brings her that much pleasure.

Most clitoral sex toys are vibrators that focus on the external nerves of the clit and vaginal lips. While this feels great, there are so many other nerves left untouched that are capable of bringing intense pleasure when stimulated. My girlfriend told me that the focused intensity of the sonic pulses on just her clit can force her to have an orgasm even when she doesn’t want one, her review was overall an extremely positive one.

There isn’t anything wrong with toys that don’t get deep in the nerves and stroke every single one of the 8 thousand nerves within the clit. There’s just something about sex toys that are able to stimulate the entire clit that changes the way my girl reacts when she comes with one.

According to my girlfriend, the Lelo Sona pulsates to the deepest membranes of her clit and stimulates her in ways that no other toy ever has.

Most sex toys, especially for me, are low-tech. Of course, there are exceptions like the Lelo F1s Programmers Kit, but 99% of sex toys are “push this button, place this where it feels good, and get off.”

While this is a tried and true method for getting people where they want to go, it is also tired and overused. Companies have gotten too comfortable with their designs and produce masses of phallus-shaped objects and think they’ve reinvented the female orgasm. Hint: They haven’t.

Rather than popping a vibrating motor into yet another penis-shaped hunk of silicone or plastic, Lelo stepped up their game and blessed women with the Sona. This toy offers sonic pulses and no part of the toy is actually meant to touch the clit. Rather, the circular opening rests around the clitoris and massages the tiny, sensitive gland by producing sonic waves that lightly push against the clit in a rhythmic manner.

Sonic waves hit the market running. This style of stimulation utilizes pulses rather than vibrations and does a much, much better job at stimulating the clitoris than vibrations ever could. It penetrates to the deepest, most sensitive layers of tissue, which in turn provides more pleasure than simple, surface vibrations.

The suction that the Lelo Sona uses creates a suction, that my girlfriend has said is one of its best features. She says that tilting the Sona just enough where it almost breaks the suction makes everything much more intense. That being said, there isn’t even any need for the Sona to make contact with the user’s body to create a pleasurable experience.

Unlike the Lelo Sona Cruise, which turns off once the suction is broken. Some lubricant will help to intensify this suction and relieve some of the discomforts that may come with clutching the device against your pubic bone during the climax, but can quickly become messy.

Made of body-safe, medical-grade silicone, and shaped like a lemon, the Lelo Sona stands out even more among it’s “peers” of penis-shaped pleasure devices. Don’t let it’s size deter you, though. The Sona has eight settings, from a soft pulsation to a sheet clenching throb, is waterproof, and rechargeable! An hour and a half of charge will provide about an hour of playtime, which is more than enough with the Sona by Lelo. It’s the perfect gift to spoil that special lady in your life.

Of course, vibrators still have their place in the bedroom, my girlfriend still reaches for hers every now and again, but they just don’t hit the same. Plastic and silicone are meant to transfer mechanically produced vibrations through their external packaging and into the top layer of nerves when applied to a body part.

This is great for what it is, but it isn’t the best that the sex toy industry has to offer. That’s why the Lelo Sona stands out, it’s specialized to get even the deepest parts of the clit.

It’s also got a cruise control feature that makes its unique pulsations nearly constant during usage! Cruise control is just the icing on the cake to the vast amount of features the Sona has to offer.

My Girlfriend’s Experience Using It

Some things that we noticed, contrary to the claims, it isn’t as quiet as the website, box, and instructions would have you believe. Granted, she has used it under covers, while I was in the same room, and I had no idea, but it sounds like a small motor whirring or an electric toothbrush. Another thing we noticed, contrary to the claims, is that it isn’t as easy to use. While my girlfriend has figured out the buttons and can push them without looking, she has noted that sometimes she isn’t sure that she was able to push the button hard enough to change the settings.

On actual use, my gf never uses the Lelo Sona without some sort of lube – even if she’s going to use it in the shower. Using lubricant creates a strong suction and helps direct the pressure deep within her clit. She has noted that she has more intense orgasms when she uses lube, compared to when she doesn’t.

I did a little “interview” with her to help write this review. She said that it helps her body get used to the waves and build up her orgasm if she starts on the lowest intensity and slowly works her way up. She has told me that rushing the orgasm can be too intense, but sometimes it’s fun to force an orgasm this way. That being said, she has told me that she rarely ever gets to the highest setting before she’s quivering.

I have already mentioned that she likes to almost break the suction of the Lelo Sona, but I didn’t tell you all that she prefers to start above her clitoral hood and slowly move the entire opening of the Sona by Lelo over her clit. This helps to engorge her clit and push more blood in that area, making it more sensitive. Using these few tricks, she usually gets off pretty quickly. Whereas with vibrators, she plays for around 15 to 20 mins, with the Lelo Sona, she lasts about 5 to 6 minutes before her entire body is melting into the bed. It’s impressive to watch (and hot). It’s rare that she can go for a second round with the Lelo Sona as it does make her rather sensitive, but it does make it much easier for her to orgasm via PIV sex.

I have noticed that my woman reaches for the Lelo Sona much more often than she does any other toy, and it has increased the frequency of how many times she masturbates. It’s just that good of a toy. We aren’t the only ones who feel this way, you can read other verified buyers reviews on the official Lelo website.

Most of the sex toys currently on the market are bulky, difficult to operate, or they just don’t provide the stimulation needed to pleasure all the nerve endings in the clit. The Lelo Sona provides insanely pleasurable stimulation to the entire clitoris, and I’ve never seen my girlfriend come so hard and intensely.

There isn’t another toy in my woman’s arsenal that gets her off so quickly and consistently.  There’s a reason that she reaches for it more than anything else she owns. Considering that the Lelo Sona penetrates the layers of the clit that other toys do not, I’m not surprised how quickly she fell in love with it.

Disclosure: This review contains affiliate links and purchasing from one of these links doesn’t cost you anything extra. I earn a small commission from each purchase made from my links, which helps to keep TugBro up and running.

I don’t recommend products just because I am an affiliate, I recommend them because I enjoy them and hope you will, too. I respect and value you as a reader and you can always expect my honest and unbiased opinion.